DISTANCE, INTEGRITY, HIERARCHY – THE ISSUE OF REGIONALIZATION OF CENTRAL EUROPE BASED ON AIR TRANSPORT FLOWS

The purpose of this study is to contribute to the general understanding of air transport organization and creation of air interactions in view of three issues – distance, integrity and hierarchy. Although these issues are generally known from literature, they were not properly studied in the case of air transport. Therefore, the article brings a new perspective on the issue of air transport evaluation, the delimitation of functional regions based on air transport interactions, and the evaluation of their hierarchical organization. We analyze the database of flights between civil airports in Central Europe. We specify hinterlands of individual airports by using the modified version of Reilly’s gravity law. The main results of this study confirmed the dominance of main airports (mainly Frankfurt and Vienna), while confirming a relatively large autonomy of airports localized in the former socialist countries (Warsaw, Prague). 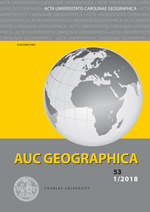