Great attention is currently being paid to the development of efficient metal catalyzed processes because the current synthesis in both laboratories and in industry often relies on these synthetic transformations. The main research goals can be seen in the design of brand new reactions, in increasing the efficiency of the known processes and also in reduction of their environmental impact. The objective of this project objective is to develop, synthesize and test new polar phosphine ligands suitable for use as catalyst in palladium-mediated C–C bond forming reactions that can be performed in water or aqueous reaction media. To this end, the structures of selected lead donors will be modified by hydrophilic tags to ensure their affinity toward water and the prepared compounds will be evaluated in practically important cross-coupling reactions. The project builds upon synergy between theoretical approach toward investigating chemical reactions and properties of the relevant compounds (in silico design), and the classical synthetic approach, which are guaranteed by the participating laboratories from the University of Bergen and Charles University in Prague.

The main aim of this collaborative project is the development of active catalytic systems for practically relevant C–C bond forming reactions through combining theoretical predictions with conventional ligand design. Improved ligand structures (Scheme 1) are meant to increase the efficacy of catalysts formed thereof and allow for use of less environmentally demanding aqueous solvents. 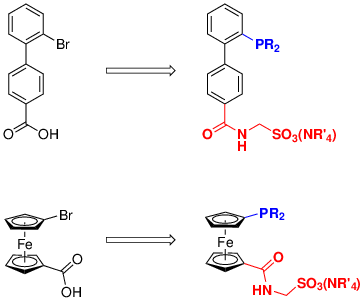 Despite a late start, the teams have advanced in project solving. Because of a head start resulting from past experience, the Czech team has already managed to synthesize several compounds that can serve as model compounds and even the target ligands (see example in Figure 1). In the meantime, the Norwegian partner team intensely worked on an implementation of the particular class of compounds to be studied into their original heuristic computational ligand-optimization concept. 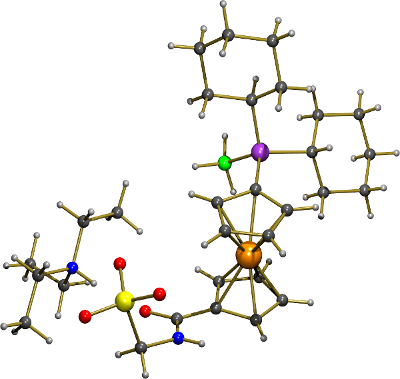