Our research focuses on molecular mechanisms by which protein function can be regulated. In particular, we are interested in 14-3-3 proteins and their complexes with proteins involved in apoptosis, cancer, G-protein and calcium-triggered signaling pathways. We employ integrated structural and biophysical approaches (fluorescence spectroscopy, analytical ultracentrifugation, SAXS, mass spectrometry, X-ray crystallography, NMR, protein structure modeling, functional assays etc.) to understand the details of how the activity and function of protein complexes are regulated.

Death-associated protein kinase 2 (DAPK2) is a CaM-regulated Ser/Thr protein kinase, involved in apoptosis, autophagy, granulocyte differentiation and motility regulation, whose activity is controlled by autoinhibition, autophosphorylation, dimerization and interaction with scaffolding proteins 14-3-3. Main goal of this project is to elucidate structural basis of the 14-3-3-dependent regulation of DAPK2.

Recently, we have shown that Thr369 phosphorylation at the DAPK2 C terminus creates a high-affinity canonical mode III 14-3-3-binding motif, further enhanced by the diterpene glycoside Fusicoccin A. Moreover, we also showed that the concentration-dependent DAPK2 dimerization is disrupted by Ca2+/CaM binding and stabilized by 14-3-3 binding in solution, thereby protecting the DAPK2 inhibitory autophosphorylation site Ser318 against dephosphorylation and preventing Ca2+/CaM binding. Please see Horvath et al. (2021) for more details. 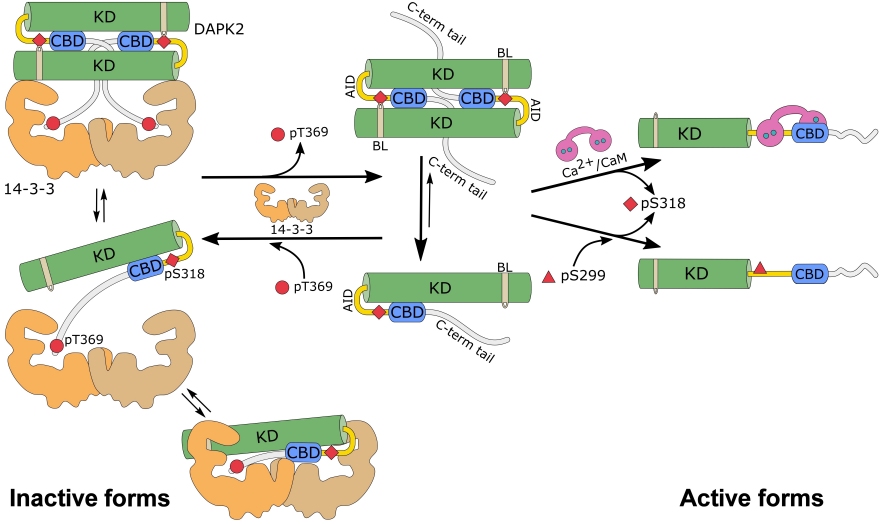 DAPK2 inhibition depends on both autophosphorylation and interaction with the 14-3-3 protein.

Protein kinase ASK1, a member of the mitogen-activated protein kinase kinase kinase family, activates JNK and p38 MAP kinase signaling pathways in response to various stress stimuli, including oxidative stress, endoplasmic reticulum stress, and calcium ion influx . ASK1 plays a key role in the pathogenesis of multiple diseases including cancer, neurodegeneration and cardiovascular diseases and is considered as a promising therapeutic target. The activity of ASK1 is regulated by several other proteins including thioredoxin and the 14-3-3 protein that both function as physiological inhibitors of ASK1. Main goal of this project is to elucidate structural basis of ASK1 regulation.

Recently, we have reported the characterization of the ASK1 domain responsible for thioredoxin binding and its complex using NMR spectroscopy and chemical cross-linking, thus providing the molecular basis for ASK1: thioredoxin complex dissociation under oxidative stress conditions. Our data revealed that the N-terminal domain of ASK1 adopts a fold resembling the thioredoxin structure while retaining substantial conformational plasticity at the thioredoxin-binding interface. Although oxidative stress induces relatively moderate structural changes in thioredoxin, the formation of intramolecular disulfide bridges leads to a considerable conformational rearrangement of the thioredoxin-binding interface on ASK1. Moreover, the cysteine residue at position 250 of ASK1 is the key element of this molecular switch. Finally, our results show that the redoxactive site of thioredoxin is directly involved in ASK1 binding that is modulated by oxidative stress. Please see Psenakova et al. (2020) for more details. TRX controls ASK1 function through redox state-dependent interactions. TRX inhibits ASK1 by direct binding to its N-terminal thioredoxin-binding domain (ASK1-TBD). Only the reduced form of TRX is able to bind to ASK1-TBD through its redox-active site containing two catalytic cysteine residues C32 and C35. Oxidative stress substantially affects the ASK1-TBD structure, including its TRX-binding surface, and induces a small structural change within the TRX active site, both due to intramolecular disulfide bridge formation within ASK1 and thioredoxin, thus causing the dissociation of the ASK1:TRX complex (ASK1-TBD and TRX regions affected by oxidation are shown in red).

The Ca2+/calmodulin-dependent protein kinase (CaMK) cascade is involved in the regulation of many physiological and pathophysiological processes. This signaling cascade consists of CaMKI and CaMKIV and their upstream activator CaMK kinase (CaMKK). The activity of CaMKK is inhibited through phosphorylation by PKA in a process involving the binding to the 14-3-3 protein. However, the molecular mechanism of this 14-3-3-mediated inhibition of CaMKK is currently unknown. Anticipated mechanisms include direct inhibition through structural modulation of the catalytic site, blocking of dephosphorylation of inhibitory phosphorylation sites or interference with the binding of Ca2+/calmodulin to CaMKK. Main goal of this project is to elucidate the molecular basis of this regulation.

In Psenakova et al. (2018) we showed that the 14-3-3 protein binding does not inhibit the catalytic activity of phosphorylated CaMKK2 but rather slows down its dephosphorylation. Structural analysis indicated that the complex is flexible and that CaMKK2 is located outside the phosphopeptide-binding central channel of the 14-3-3γ dimer. Furthermore, 14-3-3γ appears to interact with and affect the structure of several regions of CaMKK2 outside the 14-3-3 binding motifs. In addition, the structural basis of interactions between 14‐3-3 and the 14-3-3 binding motifs of CaMKK2 were elucidated by determining the crystal structures of phosphopeptides containing these motifs bound to 14-3-3. Thus, our results suggested that CaMKK isoforms differ in their 14-3-3-mediated regulations and that the interaction between 14-3-3 protein and the N-terminal 14-3-3-binding motif of CaMKK2 might be stabilized by small-molecule compounds.

In Kylarova et al. (2018), hydrogen-deuterium exchange coupled to mass spectrometry, time-resolved fluorescence spectroscopy, small-angle x-ray scattering and chemical cross-linking were used to characterize Ca2+/CaM binding-induced structural changes in CaMKK2. Our data suggested that: (i) the CaMKK2 kinase domain interacts with the autoinhibitory region (AID) through the N-terminal lobe of the kinase domain including the RP insert, a segment important for targeting downstream substrate kinases; (ii) Ca2+/CaM binding affects the structure of several regions surrounding the ATP-binding pocket, including the activation segment; (iii) although the CaMKK2:Ca2+/CaM complex shows high conformational flexibility, most of its molecules are rather compact; and (iv) AID-bound Ca2+/CaM transiently interacts with the CaMKK2 kinase domain. In conclusion, interactions between the CaMKK2 kinase domain and the AID differ from those of other CaMKs. In the absence of Ca2+/CaM binding the autoinhibitory region inhibits CaMKK2 by both blocking access to the RP insert and by affecting the structure of the ATP-binding pocket. 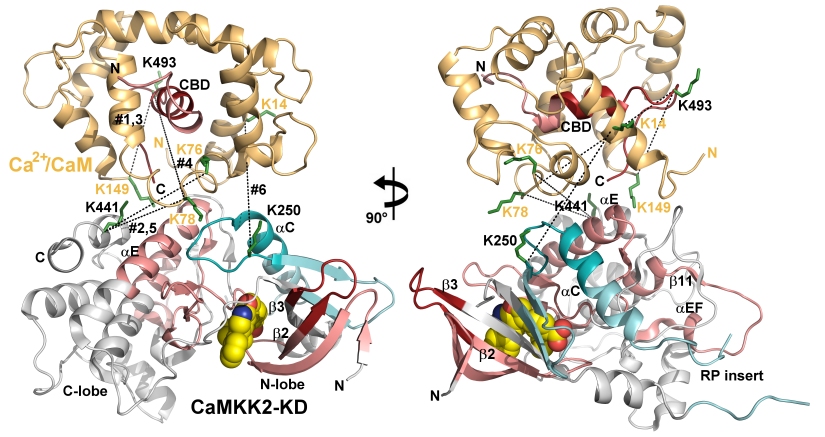 Model of the CaMKK2 kinase domain with bound Ca2+/CaM complex.

Inhibition of FOXO binding to DNA by small molecules

FOXO transcription factors control apoptosis, stress resistance and longevity in mammalian cells. Although the members of the FOXO family act as tumor suppressors in some cell types, emerging evidence suggests that FOXO3 also contributes to tumor stem cell renewal, immune suppression, metastases and chemotherapy resistance in certain cancer types. By a combined in silico / cell biological screening approach several small, drug-like compounds that interact with the DNA-binding domain of FOXO3 and efficiently inhibit its transcriptional activity have been identified. The main aim of this project is to define the structural basis for the interaction between compounds and FOXO3 by NMR spectroscopy, design and develop derivatives with improved properties regarding solubility and affinity, analyze compound-dependent inhibition of target recognition by FOXO3 in vitro and in vivo, study the effects of compounds on FOXO3-induced cancer cell survival in 3D cell culture and in vivo. This project is a collaboration with the group of prof. Michael J. Ausserlechner from Medical University Innsbruck, Innsbruck, Austria.

In Psenakova et al. (2019) we reported the high-resolution structure of the DNA-binding domain of FOXO1. The comparison with structures of other FOXO proteins revealed differences in both their conformation and flexibility. These differences are encoded by variations in protein sequences and account for the distinct functions of FOXO proteins. In particular, the positions of the helices H1, H2 and H3, whose interface form the hydrophobic core of the Forkhead domain, and the interactions between hydrophobic residues located on the interface between the N-terminal segment, the H2-H3 loop, and the recognition helix H3 differ among apo FOXO1, FOXO3 and FOXO4 proteins. Therefore, the availability of apo structures of DNA-binding domains of all three major FOXO proteins will support the development of FOXO-type-specific inhibitors. 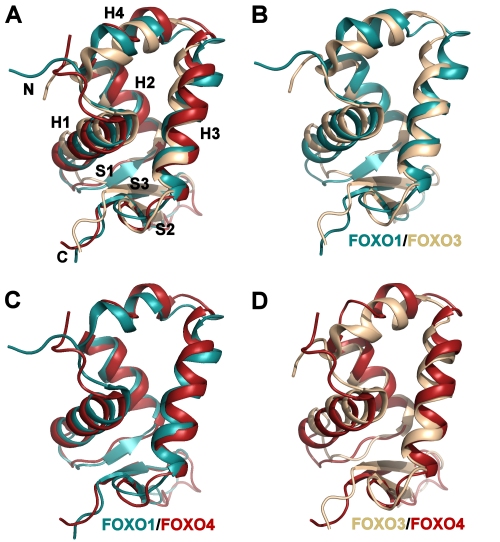 14-3-3 proteins regulate function of more than 200 binding partners including proteins playing prominent roles in cancer development (e.g. transcription factors p53 and FOXO), neurodegeneration (e.g. Tau protein, ASK1 kinase), cardiovascular diseases (e.g. RGS proteins, phosducin) or inflammation (e.g. NFkB, ASK1 kinase). Thus specific modulation of these protein-protein interactions (e.g. between 14-3-3 and FOXO or ASK1) by small-molecule compounds can provide promissing drug candidates as well as to help us to understand the 14-3-3 signalling biology. The project was done in collaboration with the group of prof. Christian Ottmann from Technische Universiteit Eindhoven and other partners and it was funded by H2020-MSCA-ITN project 675179 TASPPI (http://www.tasppi.eu/about/).

In Lentini Santo et al. (2020) we investigated the stabilization of interactions between CaMKK2 and 14−3−3γ by Fusicoccin A and other fusicoccanes - diterpene glycosides that bind at the interface between the 14-3-3 ligand binding groove and the 14-3-3 binding motif of the client protein. Our data reveal that two of five tested fusicoccanes considerably increase the binding of phosphopeptide representing the 14-3-3 binding motif of CaMKK2 to 14-3-3γ. Crystal structures of two ternary complexes suggest that the steric contacts between the C-terminal part of the CaMKK2 14-3-3 binding motif and the adjacent fusicoccane molecule are responsible for differences in stabilization potency between the study compounds. Moreover, our data also show that fusicoccanes enhance the binding affinity of phosphorylated full-length CaMKK2 to 14-3-3γ, which in turn slows down CaMKK2 dephosphorylation, thus keeping this protein in its phosphorylation-mediated inhibited state. Therefore, targeting the fusicoccin binding cavity of 14−3−3 by small-molecule compounds may offer an alternative strategy to suppress CaMKK2 activity by stabilizing its phosphorylation-mediated inhibited state. Phosducin (Pdc) is a highly conserved acidic phosphoprotein that regulates visual signal transduction by modulating the amount of transducin Gtαβγ heterotrimer through  competition with the Gta subunit for binding to the Gtβγ complex. Pdc was also shown to regulate the cardiovascular system by modulating sympathetic activity and blood pressure. Phosducin function is regulated through the phosphorylation and the binding to the 14-3-3 protein. Main goal of this project was to elucidate solution structure of the 14-3-3:pPdc complex and provide a mechanistic explanation for the inhibitory effect of the 14-3-3 protein binding on interaction between phosducin and G protein.

Solution structure of the 14-3-3:pPdc complex 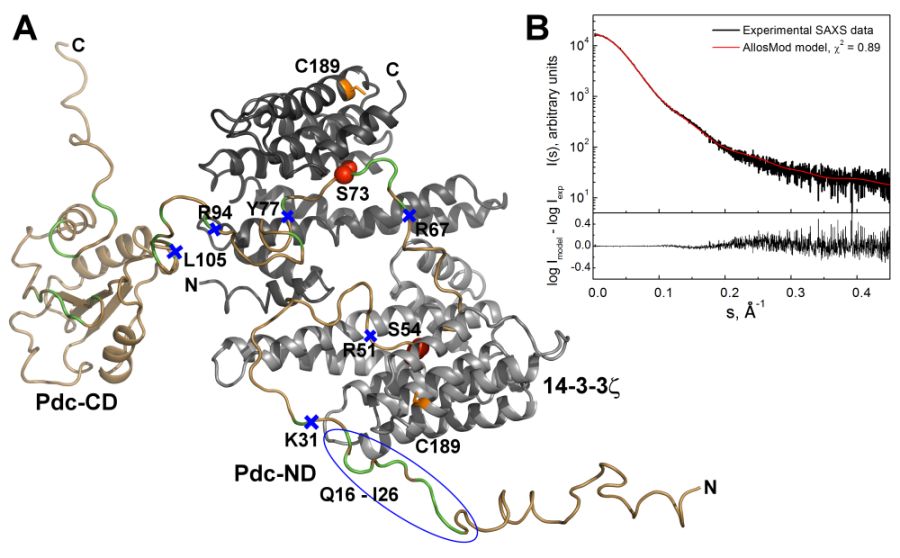 Neutral trehalase 1 (Nth1) catalyses the hydrolysis of trehalose to glucose. Trehalose is found in many organisms ranging from bacteria to higher plants, and in yeast it functions as a major storage carbohydrate, carbon source and a stress protectant. The activity of yeast Nth1 is triggered by the protein 14-3-3, an interaction that is phosphorylation dependent. Main goal of this project is to elucidate the molecular mechanism of the 14-3-3-dependent activation of yeast Nth1. This project was funded by Czech Science Foundation (Project P207/11/0455). 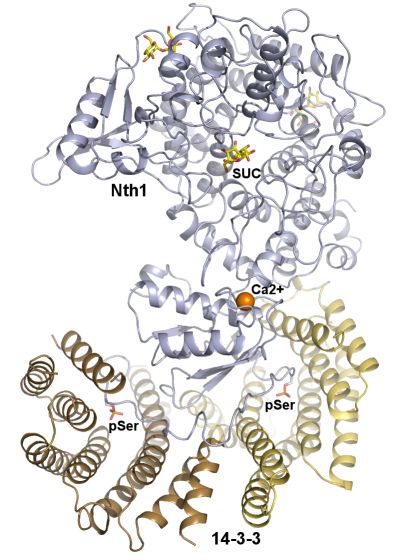 Crystal structure of the complex between phosphorylated Nth and Bmh1 (yeast 14-3-3 protein) (PDB 5N6N). The protomers of the Bmh1 homodimer are shown in yellow and brown. Nth1 is shown in blue. The phosphorylated Ser60 and Ser83 are shown as sticks. The calcium ion is shown in orange.

Structural analysis revealed that the binding of phosphorylated Nth1 by 14-3-3 triggers Nth1’s activity by enabling the proper 3D configuration of Nth1’s catalytic and calcium-binding domains relative to each other, thus stabilizing the flexible part of the active site required for catalysis (Alblova et al. (2017) PNAS USA).

Structures solved by our group 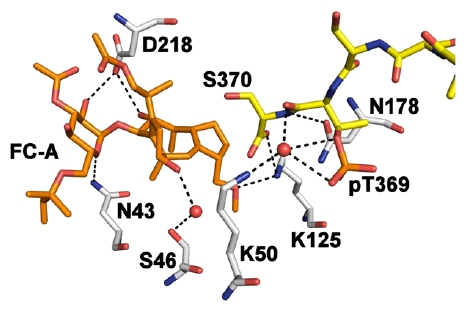 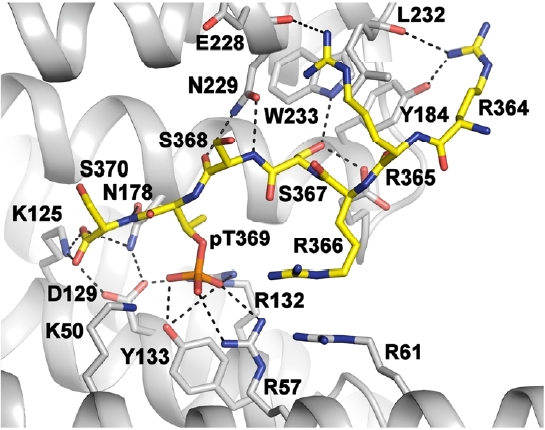 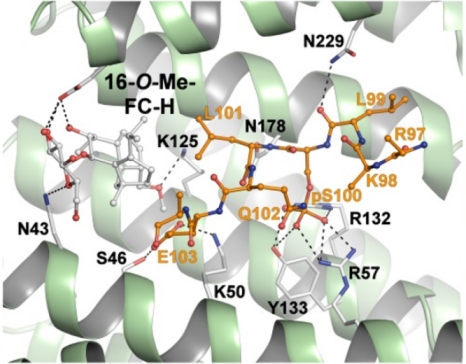 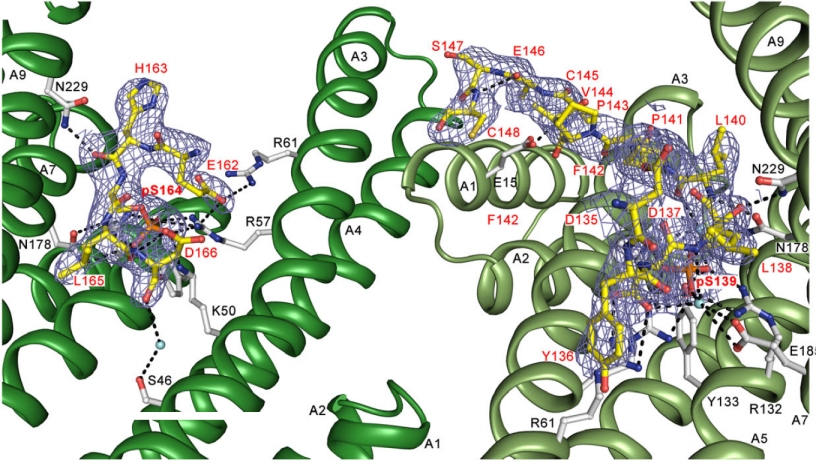 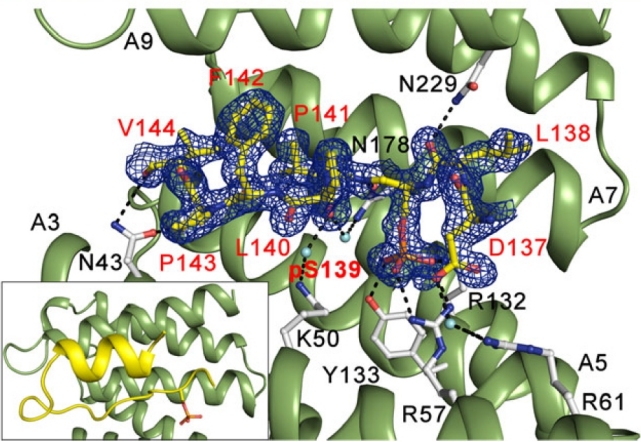 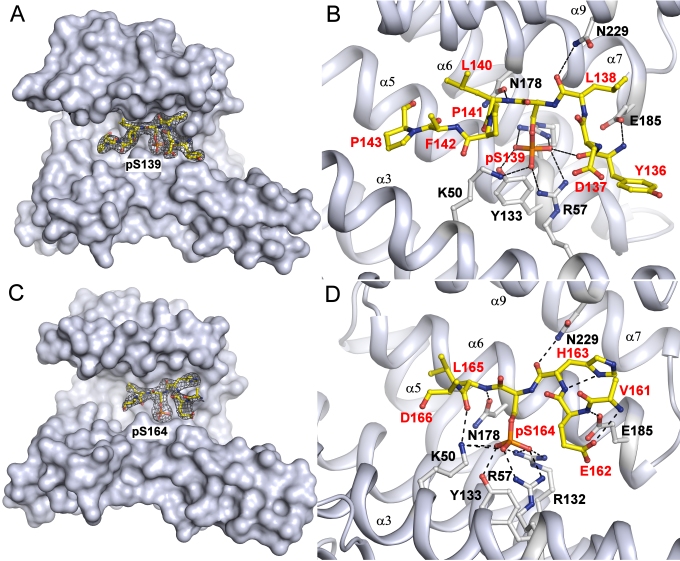 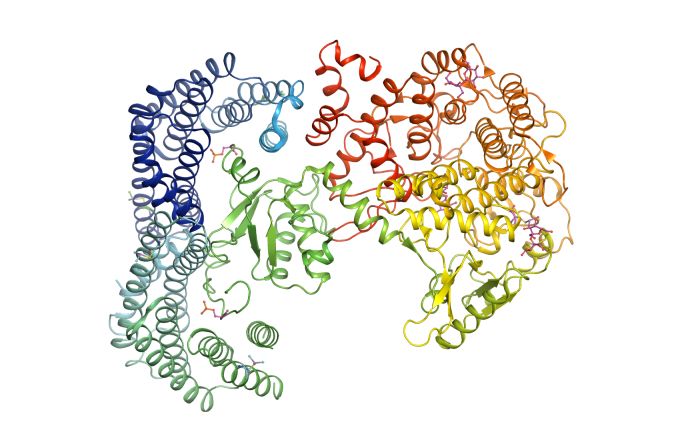 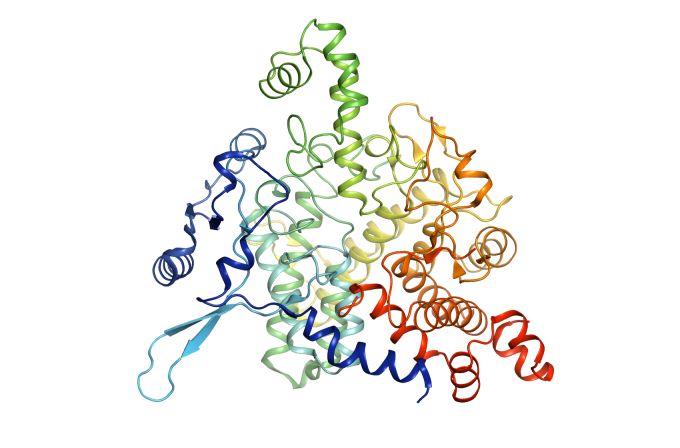 Neutral trehalase Nth1 from Saccharomyces cerevisiae in complex with trehalose 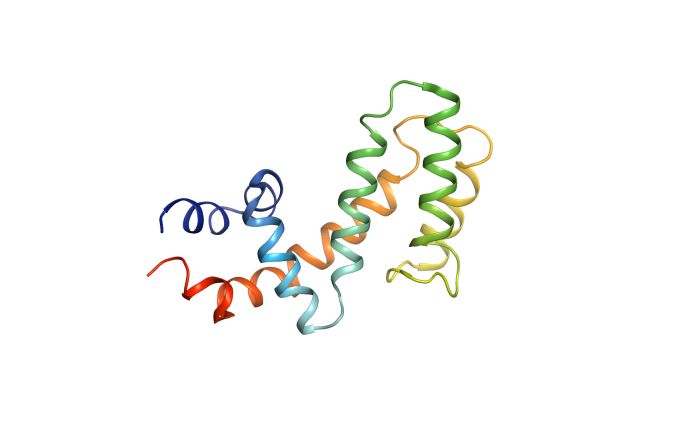